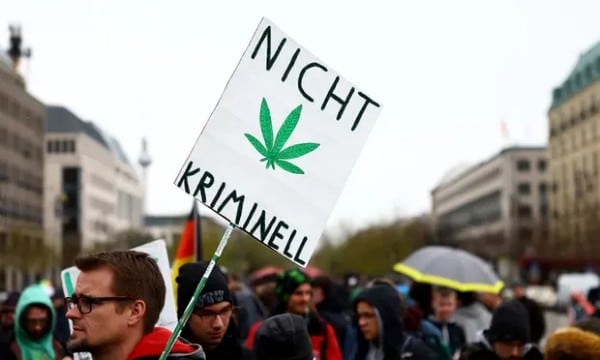 In an effort to overcome legislative obstacles within two years, the coalition government meets with economists, growers, and health specialists.

As the left-liberal administration of the nation moves through with plans to permit the restricted distribution of the drug among adults, Germany is considering the implications of soon becoming the world’s largest potential market for legally supplied cannabis.

Olaf Scholz’s coalition administration recently reaffirmed its 2021 coalition-deal commitment to legalize marijuana for recreational use, which its Green and Liberal Party ministers have been referring to as “Bubatz,” a hip-hop slang term for marijuana.

This week marked the conclusion of a consultation process that included five public sessions with health professionals, economists, and cannabis cultivators. With that, the race to overcome legal and regulatory obstacles in one to two years got underway. A bill draft is anticipated in the second half of 2022.

the biggest economy in Europe By legalizing cannabis for recreational use alongside Canada and California, Germany might put pressure on other European nations to follow its example and modify the UN treaty that forbids the growing of the plant.

Director of the Düsseldorf Institute for Competition Economics Justus Haucap predicted that there would be a domino effect. “Countries in Europe with a considerably worse issue with illegal cannabis usage, like France, are keenly monitoring what Germany is doing right now.”

The nation would also stand to benefit greatly economically: with an estimated 400 tonnes of domestic cannabis demand annually, Haucap’s institute estimates that Germany stands to gain about €4.7 billion (£4 billion) annually from increased tax receipts as well as cost savings from no longer prosecuting those who enjoy a few joints.

The official justification given by the government for legalization is to suppress the black market for cannabis, obtain control over the quality of the product being sold, stop the spread of contaminated goods, and safeguard children.

The German commissioner for narcotic drugs, Burkhardt Bienert, stated on Thursday that “we are talking about a regulation of the market.” “If we do it right, we can stop teenagers from starting an intensive usage. We don’t want to make the same errors with alcohol again.

The German government must make some difficult decisions in order to accomplish its stated goal, which were further clarified during the consultation event on Thursday with public leaders from nations that have previously legalized cannabis.

Only 25 pharmacies in Uruguay, where cannabis usage for recreational purposes has been legal since 2013, are authorized to sell the substance, and 70% of customers still purchase it on the illicit market.

While Canada has made some progress since legalization in 2018, it has done so through a regionally varied patchwork of state-controlled and free-market supply systems, making it difficult to draw general conclusions. California, which legalized recreational cannabis use in 2016, has struggled to compete with the illicit market.

The government is experimenting with a closed supply chain scheme and a track-and-trace system in the Netherlands, which is known for its lax attitude toward marijuana use but still technically criminalizes it for recreational use, possession, and trade, in an effort to eradicate the black market from its coffee shop culture.

The German government is being lobbied by the hemp sector to tax cannabis products at a maximum rate of €10 per gram of bud, with a lower fee for plants with less tetrahydrocannabinol (THC). They contend that both a higher tax rate and a blanket ban on state-offered marijuana advertising will benefit illegal merchants.

The CEO of Bloomwell, a company established after Germany legalized the use of cannabis for medical purposes in 2017, Niklas Kouparanis, urged the government to also legalize the selling of cannabis through online retailers. He claimed that limiting cannabis sales to pharmacies and licensed stores will drive out dealers and restrict distribution to urban areas.

According to Kouparanis, “Legalization can only be successful if we are able to drain the illegal market, and we will only be able to accomplish that if we can provide an extensive nationwide supply of legal cannabis.” “The illicit market will survive and Germany will become exactly no one’s role model if you only have a few supply stations in Bavaria, for example.”

However, organizations dedicated to child safety and juvenile welfare are strongly opposed to the sale of cannabis through online stores. They argued during the court on Thursday that only properly trained and licensed employees should be allowed to sell cannabis over the counter in order for the government to uphold its claimed goal of protecting children.

In the medium run, Germany would be dependent on imports if the state assumed control of providing cannabis to adult users. Germany still gets 85% of its yearly use from imports from countries like Canada, Portugal, Spain, or the Netherlands five years after medical use was made legal there.

Additionally, engaging in cannabis trading and sales would be against the UN’s 1961 Single Convention on Narcotic Drugs. The nation might try to ignore the convention like Canada and Uruguay have done, or it could find a means to get around it. It would be more likely that the legalization of marijuana in Germany would spark a push to completely alter the agreement, according to Haucap.

Theoretically, he said, Germany could leave the UN Single Convention and just rejoin some portions of it. But given the developments taking place in Canada, the US, and now Germany, I’m very optimistic that the convention governing the trade in cannabis will be revised as well.