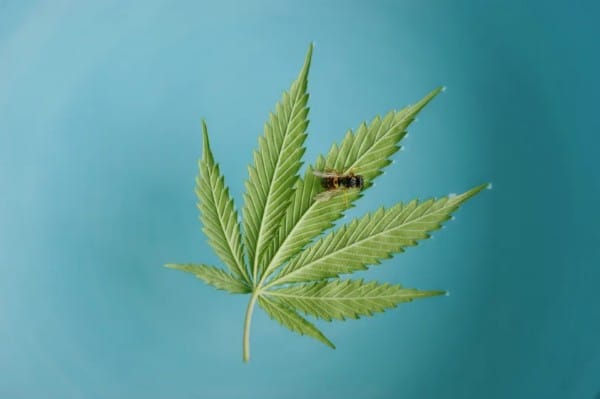 No matter what variety of cannabis is utilised, it contains a tonne of medicinal qualities. There is a lot these plants can do, whether it be high-THC marijuana, high-CBD hemp, or even cannabis ruderalis. One of the more recent discoveries is connected to a topic that many people find interesting. A recent study demonstrates how hemp prolongs the lives of honeybees. Does it work the same way on people?

Hemp has demonstrated the ability to extend honeybee lifespan by altering their antioxidant behaviour. What could this possibly imply for both humans and the rest of the animal kingdom? More detailed responses won’t come for a while.

Setup for the study

Impressive Impact of Hemp Extract on Antioxidant System in Honey Bee (Apis mellifera) Organism was a study published recently by scientists affiliated with the Department of Invertebrate Ecophysiology and Experimental Biology at the University of Life Sciences in Lublin, Poland. The study’s goal was to find out what happens to the antioxidant system when honeybees are administered hemp extract.

We looked into how hemp extract affected the activities of the antioxidant system (catalase, peroxidase, glutathione, superoxide dismutase, and total antioxidant capacity) in the hemolymph of adult honey bees (Apis mellifera), according to the researchers. The researchers divided the bees into three groups in order to do this. It should be mentioned that only worker bees (females incapable of reproduction) were used.

Group under study was provided with pure syrup (sugar) to eat and had cotton strips soaked in hemp placed in a cage.

Experimental group was injected with a liquid containing sugar and hemp extract.

given a sugar, water, and glycerine mixture to eat as the control group

Bee hemolymph, or bee blood, was taken on the first day of the study and then every week after that until all the bees had died. Along with their blood, the deceased bees were also inspected. In terms of simply being able to live longer, the findings are pretty intriguing.

The lifetime of honeybees is one of the most intriguing results of hemp use. The average lifespan of the sugar-only control group was 35 days. When hemp was administered to honeybees directly via syringe, they lived an average of 52 days, with the longest longevity being 56 days, compared to the group that received sugar and hemp separately, which lasted about 49 days. In order to put this into perspective, a worker honeybee’s typical lifespan is 2–6 weeks in warm weather and about 20 weeks in colder weather. It means that in warmer climates, bees nearly never live longer than 42 days.

According to the researchers, this is due to “Hemp extract’s antioxidant qualities, which raised the activities of essential antioxidant enzymes that protect the bee’s organisms against free radicals and so delay the ageing processes.”

The activity of all antioxidant enzymes were higher in the experimental groups than in the control group, they continued. The group that had cannabis added with syringes showed the strongest antioxidant activity.

It was hypothesised that “The increase in the activities of antioxidant enzymes could be caused by the influence of CBD on the permeability of ion channels, i.e., potassium, sodium, and calcium, and therefore change in the cell membrane environment” even though the researchers were unable to pinpoint exactly what in the hemp extract caused these antioxidant changes in the honeybees.

Data that validated the syringe approach as the most effective way to deliver the hemp extract to the honeybees was added to these findings. This is rather typical as we already know that IV injections are frequently more effective than other approaches, especially oral intake.

Although this study raises the question of whether hemp has the same power to lengthen human life, other characteristics were more important to the researchers. “Thanks to this, we believe that hemp extract can in the future contribute to the enhancement of honey bees’ natural immunity and help them with the battle against environmental pollution and the increase in oxidative stress,” they concluded the research. This could be a good strategy to maintain the health and happiness of the flying stingers, especially in light of recent challenges and worries regarding bee populations dying out.

Unfortunately, no research of this kind has been done on humans, therefore animal studies are the greatest way to demonstrate how hemp affects ageing. However, there are more of those. The Effect of Cannabidiol on the Long-Term Toxicity and Lifespan in the Preclinical Model Caenorhabditis elegans paper from 2021 is an example. Caenorhabditis elegans, for those who don’t know the terminology, are roundworms. It was discovered that CBD assisted with resistance to heat stress, improved lifespan by 18%, and encouraged a 206 percent increase in late-stage life activity, in addition to the fact that no worms died from exposure to CBD in the right dosages.

Another illustration is the skills of the brain as it ages and how cannabis can alter these, rather than necessarily being tied to lifespan. Entitled This 2017 study demonstrates how ageing mice can have their brains regress to as far back as a two-month-when old’s given a low-dose treatment of delta-9 THC. This study found that a continuous low dose of 9-tetrahydrocannabinol (THC) recovers cognitive performance in old mice. The study’s findings “demonstrate that a low dose of delta-9-tetrahydrocannabinol (THC) restored the age-related deterioration in cognitive performance of mice aged 12 and 18 months.”

This behavioural effect was followed by increased production of synaptic marker proteins and increased hippocampus spine density, according to the researchers. THC treatment “restored hippocampus gene transcription patterns such that the expression profiles of THC-treated mice aged 12 months closely resembled those of THC-free animals aged 2 months,” according to the study.

There are very rigorous regulations on how research must be conducted when it involves humans, which is why there are no human studies about how cannabis might lengthen life. The capacity to do such a study on healthy humans is nonexistent when you consider that we live considerably longer than honeybees, roundworms, or mice. This is not the case with studies including people with illnesses, but since these studies can’t reveal the impacts on a healthy person, they are useless in this situation.

Therefore, despite a wealth of data demonstrating cannabis’ many health advantages, including how it can slow down the ageing process, we are unable to conclude that marijuana can extend human life. But that doesn’t mean we can’t try to live healthy lives and take every precaution to take care of ourselves so that we can continue to be strong. Utilizing healthful items around us, even if they don’t necessarily lengthen our lives beyond keeping us healthy, is a part of this. as in honey.

The fact that we consume the honey produced by honeybees is an intriguing feature. The study mentioned above makes no mention of whether the honey produced by these bees would differ in any way from honey produced by bees not given hemp extract or what that might imply. Unfortunately, there isn’t much research on this topic, but it’s a fascinating idea. One of the few studies on the subject involved feeding hemp plants to bees, and while the bees produced propolis and pollen that contained cannabinoids, the study had the drawback of having low cannabinoid levels and little actual honey produced.

This does not preclude the possibility of different and/or better results under different and/or better circumstances. One of the things about honey that we already know is that it is highly healthful and helpful for many types of issues. What if consuming an animal’s waste that has been treated with something like hemp could endow the diner with a beneficial trait? We may be able to get all the wonderful benefits of honey and all the wonderful benefits of hemp in the future thanks to better cannabis honey. And perhaps we’ll discover that it extends our lives.