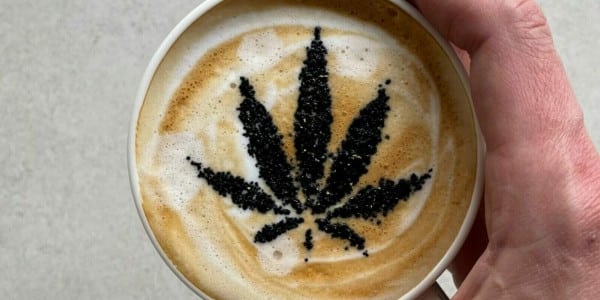 Cannabis has inspired some of history’s greatest brains, much as coffee has contributed significantly to the global economy. Coffee and marijuana have fostered waves of invention and helped to create the society we live in today.

The Discoveries of Cannabis & Coffee

Although the exact moment and method of coffee’s discovery are unknown, Ethiopia’s historic coffee forests are where it all began. According to legend, the goat herder Kaldi became interested in coffee after his goats began to remain up all night after consuming coffee berries. He told the other monks at his neighborhood monastery about this discovery, and rumors started to circulate.

By the sixteenth century, coffee was being grown in Turkey, Syria, Egypt, and Persia. There were numerous coffee shops where individuals would hold discussions, play chess, and exchange global news. By the 17th century, coffee had reached Europe and was even becoming a famous pilgrimage destination.

Contrarily, cannabis has a considerably older history. It is said to be among the earliest plants ever domesticated and has been mentioned in some of the earliest writings. Even the founder of traditional Chinese medicine, Emperor Shen Nung, mentioned cannabis in his pharmacopeia in 2800 BC.

But because it was so deeply ingrained in Indian society, cannabis was most common there. Shiva, one of the major gods in Hinduism, was known as “The Lord of Bhang” because he used cannabis to access celestial powers. Bhang, a conventional cannabis-infused beverage, is still consumed during Shiva worship.

And it was here that William Brooke O’Shaughnessy, an Irish doctor working in India at the time, found cannabis. He researched the herb, wrote about its medicinal applications, and took it back to England. When marijuana first entered the West, it was greeted with wide arms—Queen Victoria herself was a habitual user!

A Glimmer of Wisdom

Since the water in Europe was too dirty to drink, beer has long been the preferred beverage. The most of the day would be spent with intoxicated or at least tipsy people, including children! People frequently began their days with “beer soup,” which was presumably necessary for the types of tasks they were working at the time.

The popularity of coffee increased productivity and innovation in Europe. Instead of drinking beer, people were starting their days with a cup of coffee. They were able to work longer hours and felt more energised and concentrated as a result.

In Europe, coffee shops gained a lot of popularity. People from all social classes might congregate there to talk about the news and exchange opinions. The popular outrage caused by King Charles II’s attempt to outlaw coffee shops and the free speech they promoted led to him lifting the ban just days later.

The emergence of new coffee shops with a focus on science, politics, literature, and early journalism led to the development of numerous enterprises. For instance, in 1688, Lloyd’s of London got its start.

It should come as no surprise that the west experienced a spike in coffee consumption during the era of enlightenment. Coffee shops sparked intellectual exchange, stimulated dialogue, and fostered a spirit of equality that was unprecedented in those days.

Cannabis gained popularity at least as quickly as coffee. The plant was favored by the upper class and used by them to unwind and reflect on the outside world. Some of history’s most well-known personalities would frequently congregate at “Hashish clubs,” which are exactly what they sound like.

Even though cannabis and coffee were among the most widely used drugs in the 18th century, this didn’t last for very long. As industrialism expanded, corporations need a large workforce. They sought employees who could work 16-hour hours and have late departures and early arrivals. workers capable of maintaining alertness while operating hazardous heavy gear.

And coffee helped with that. No, not so much cannabis.

In addition, these drugs were widely used in the American colonies. Coffee replaced tea as the preferred and more patriotic beverage after the tea tax. Additionally, growing hemp for the army was formerly a requirement for all farmers. Even the medicine cabinets of good Americans included cannabis.

People’s perceptions on cannabis underwent a radical change in the 1970s. The usage of cannabis, according to the media, would cause madness, crime, and death. “Marijuana” was categorized as a Schedule I substance without any solid supporting evidence. And it is still the case now.

There is still a coffee maker in every office nowadays. Throughout the day, it makes us feel more productive, energised, and focused.

Sadly, there are still many obstacles and negative stereotypes surrounding cannabis, but things are changing.

Regulations are gradually shifting, new research is debunking public worries, and demand for cannabis products like CBD is surging.

To enjoy CBD’s advantages without getting high, you can even try adding it to your morning coffee.

You can feel peaceful and focused throughout the day by balancing the caffeine buzz with CBD. Even some of the negative effects of coffee, such headaches or jitters, might be helped by it.

The pairing of cannabis and coffee is not new. This legendary pair has been around since the 1970s, when starting the day with a joint and your coffee (a “Hippie Speedball”) was a common practice! Naturally, you might not want to begin every day in this manner; for this reason, CBD is a fantastic non-intoxicating substitute.

If you want to be a productive Pot Head, try our CBD-infused coffee mixes or just add a few drops of CBD to your morning brew.

Please get in contact if you have any inquiries about our CBD-infused coffee. We always appreciate hearing from you.