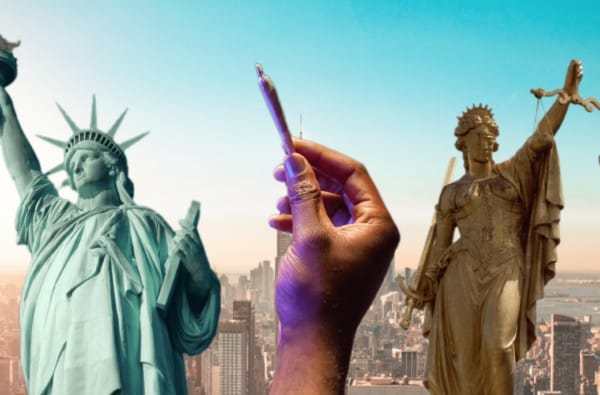 Has the state of New York legalised marijuana? The State’s Cannabis Control Board approved regulations last week that move the sale of cannabis for adult recreation closer.

A licencing scheme that lawmakers had proposed earlier this year was approved by regulators. For candidates with prior convictions relating to cannabis, the plan offers the first round of retail licences. The first State to do this is New York State.

And it differs greatly from the approaches used by other countries to the problem. For instance, the government of Canada chose to ignore the issue of expunging prior convictions. Profiting from the legal cannabis market, former law enforcement officials and elected officials urged the government to exclude people with criminal records. There haven’t been any big changes north of the border even four years later.

The devil will be in the details when marijuana is legalised in New York State.

A CAURD licence applicant must show proof that they or a family member has been convicted of a cannabis-related offence at some point in the previous year in order to receive approval. The offence must have occurred in New York State.

Unfortunately, the typical government obstacles stand in the way of this positive step. Additionally, candidates must have at least two years of experience running a successful firm. Critics claim that this opens a back door for even more discrimination, especially against persons of colour who are disproportionately affected by cannabis convictions.

And that makes sense: legal cannabis offers a path to redemption if you’ve struggled with the law your entire life due to your upbringing and circumstances. However, these persons have already been excluded by New York State bureaucracy. It is not sufficient to be passionate about the field. Even having some money does not suffice as proof that you can follow your passion. No, taxpayer-dependent pencil-pushers insist that you must already be a successful business owner.

Entry restrictions for established firm owners go against the spirit of free markets and are crony capitalism.

And given the other discriminatory actions taken by New York State, it is not surprising. Covid vaccination requirements made it difficult for many people to use the gym or eat in eateries. Additionally, because African-Americans made up the majority of the unvaccinated in New York (a group that understandably lacks confidence in the government), the state’s vaccination mandate amounted to racist segregation.

When is marijuana legal in New York?

Next month, the application procedure is anticipated to begin online. Everyone will be notified 14 days before to the application window opening, according to the New York Office of Cannabis Management.

The “Seeding Opportunity Initiative,” which New York Governor Kathy Hochul continues to promote, is said to give priority to individuals affected by the drug war. While granting retail licences to people with cannabis convictions is a positive move, regulators have countered it with extra red tape.

The majority of the time, behaviour speaks louder than words. Additionally, New York State’s cannabis policies are appalling so far. Tremaine Wright, the head of the Cannabis Control Board, declared, “We’re leading with equity in this state.” But is this actually the case?

Individuals should have equal opportunities, according to equality. Everyone would be free to succeed or fail depending on their own inventiveness if the cannabis laws in New York sought equality.

Equity indicates that the State should intervene and allot resources to ensure that marginalised people are given the same opportunities as non-marginalized people because every person has unique life circumstances.

Of course, definitions are offered by the government with the assistance of academic institutions supported by tax dollars.

Nevertheless, the procedure to make cannabis legal in New York remains in progress. By the end of the year, probably by Thanksgiving, anticipate recreational adult sales.

How Does Medical Cannabis Compare?

The medical programme is also altering, according to the New York Cannabis Control Board. Processes for registering patients are being streamlined. In order to comply with the new recreational standards, the State is also updating its packaging, labelling, marketing, and advertising requirements.

The new cannabis laws in New York include:

No enticing anyone under the age of 21 (no labels with cartoons, celebrities, etc.)

The consumer cannot be told whether a product is organic. Nothing about health. Additionally, you cannot use the word “craft.”

Graphics and labelling must be approved by the Cannabis Control Board.

No smells or noises can come from products.

The legalization programme in New York State is proving to be more stringent than even the most stringent jurisdictions in several areas.